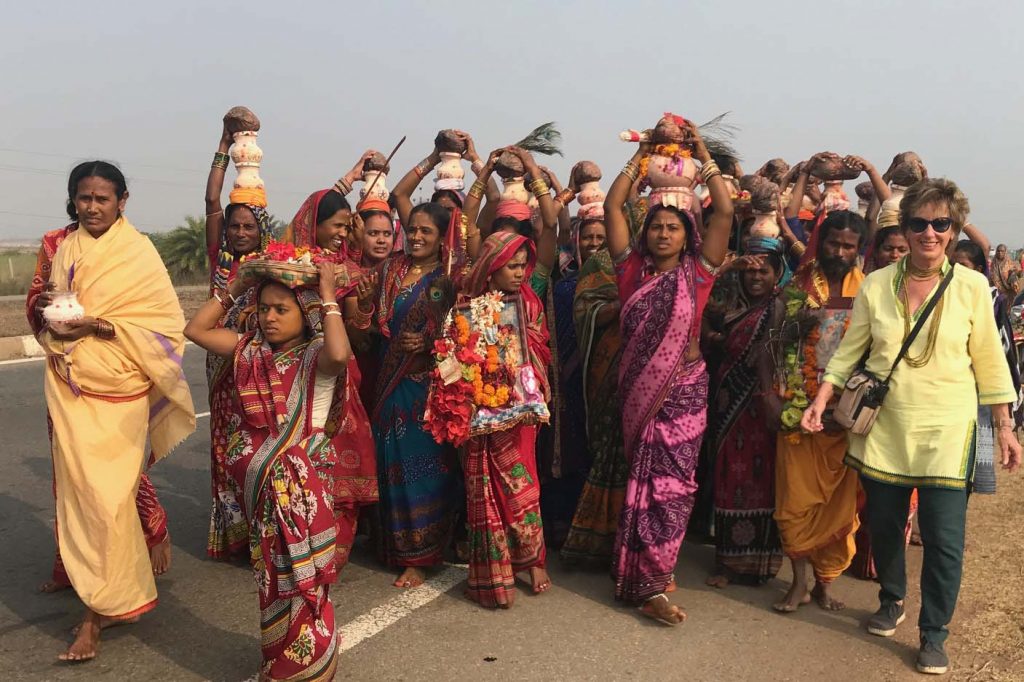 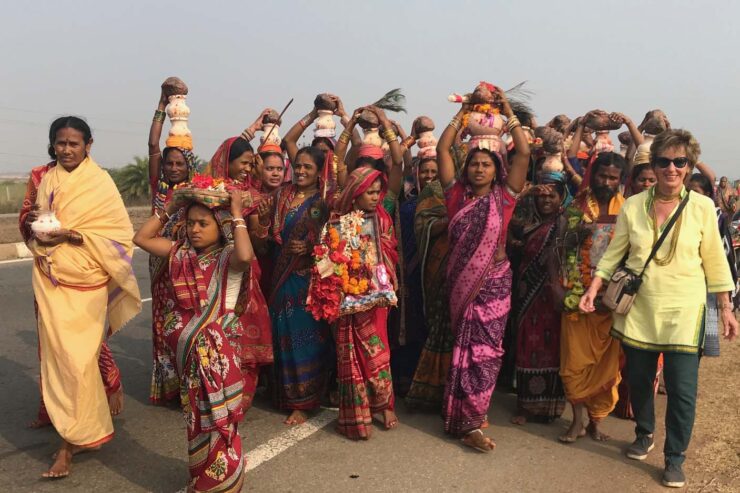 Does the opening photograph mean anything to you? Follow me into a part of Odisha whose atmosphere, monuments and especially encounters (my passion) are totally different from those in the tribal villages.

From the mountain tribes to the sea. A seven-hour journey to Gopalpur, our destination. It is January 26, India’s Republic Day. In the Mali Dhoulir Ambo village, youngsters wave the national flag, cows walking in line leave the houses to go and graze in the surroundings, people enliven the Kunduli market nearby.

We are finally at the seaside. The beach is very lively, as always at sunset in India. Entire families come to enjoy the sight of the setting sun, even though in this part of the subcontinent, the fiery orb does not sink into the sea. The hotel in Gopalpur is a pleasant surprise: the Mayfair Beach Resort. After the spartan accommodation of the previous days, it feels like a palace: beautiful location, beautiful rooms, splendid bathrooms to revamp your look. 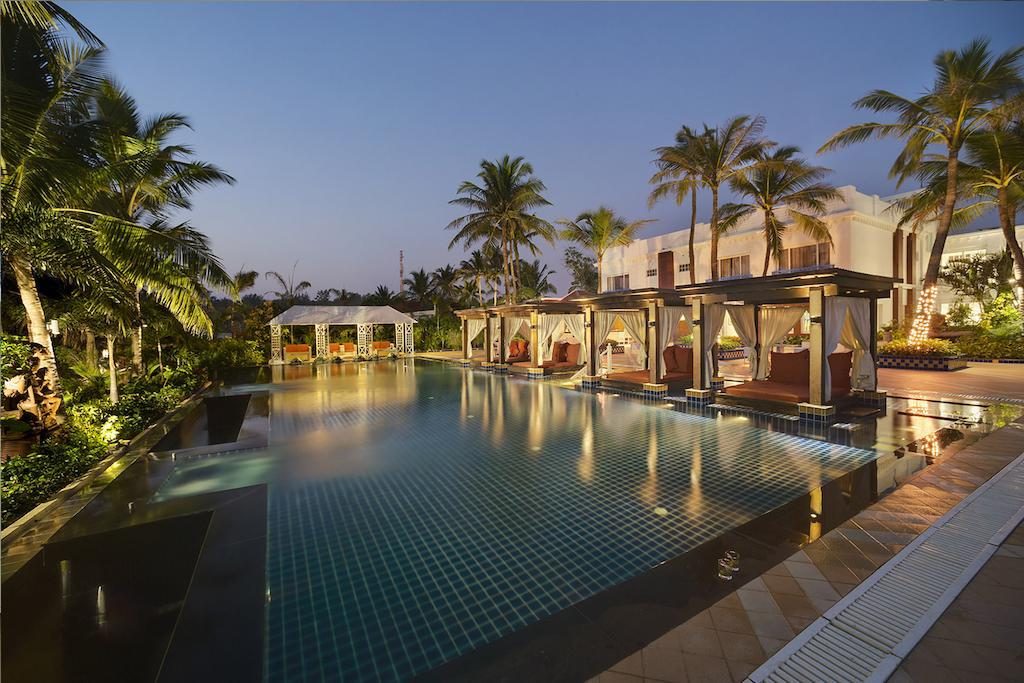 I relish being in the India that I am familiar with. Full of surprises. In Giantam, a few kilometres from where we set off, a loud sound of drums heralds the arrival of a large group of women, lead by a brahmin. They are heading towards the river nearby for the Sansi Mata Puja, the prayer of gratitude and thanks to Shiva for having allowed the reconstruction of their temple, which was destroyed by a hurricane a couple of years ago. The colour of their sarees attracts me irresistibly. No two sarees are the same!!

I join the group and walk with them until our guide, Jitu calls me to order. I would have liked to reach the river to observe the puja, but it is a couple of kilometres away. Too many.

However, the dry fish market at Humma is a consolation. Incredible. The marketplace is crammed with baskets of many different types of dried fish. Will they manage to sell them all in one day?

Lake Chilika: not to be missed!

I expected a lake like many others. Instead, I find myself in front of the largest brackish water lagoon in Asia, separated from the Bay of Bengal by a long strip of sand. I choose to reach Kalija temple island by boat. The temple attracts innumerable Hindu pilgrims in the month of January. In fact, even today in the hustle and bustle around the temple there are brahmins, pujas, offerings and stalls. Before boarding, it is a must to book at the Barkul restaurant, where fresh, delicious king prawns both fried and in curry are served. (For readers of Dalverdealrosa: I have given the recipe to Franca. Let’s see if she can make them as tasty). 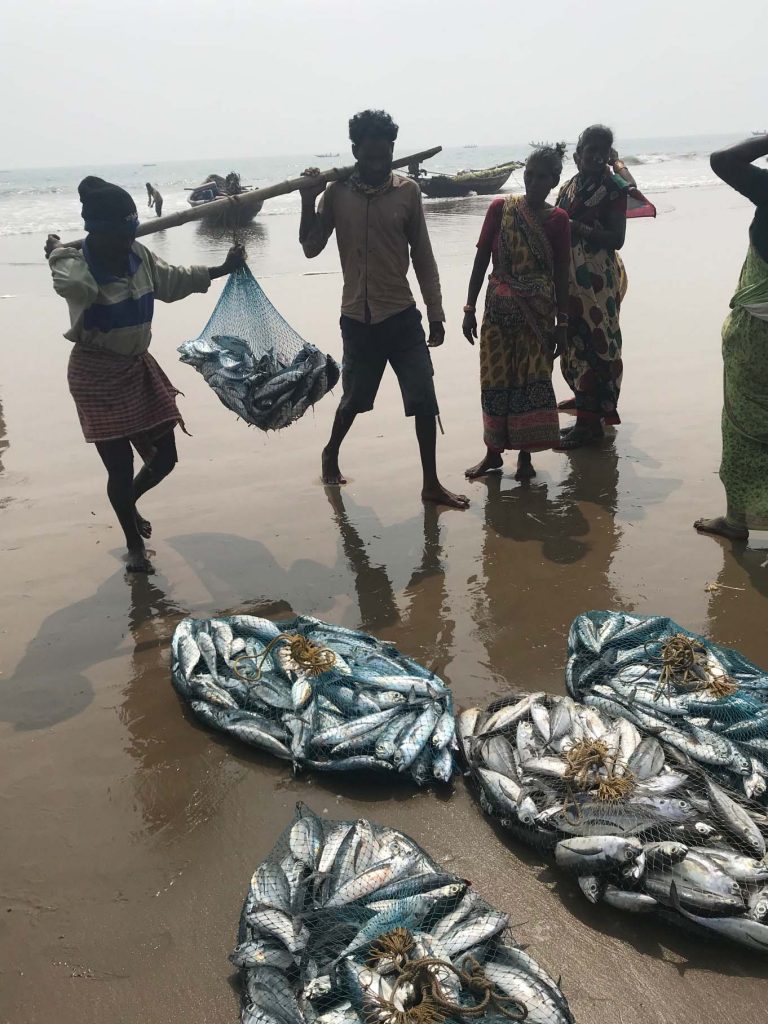 The real surprise of Chilika Lake is the Mangalajodi Sanctuary. The organisation is perfect. Motor boats slide silently among the fields and the rushes on the lookout for lagoon wildlife, enlivened by a million migratory birds. A treat for birdwatchers. On the boat with us is Singh Deo, alias Jimmy, an incredible person, who has travelled all over the world as a dancer in the national Chhau dance group. When I mention Ileana Citaristi, who I have planned to meet in Bhubaneswar, his eyes open wide. Padmashree Dr. Ileana Citaristi is the most famous Odissi dancer of the subcontinent. 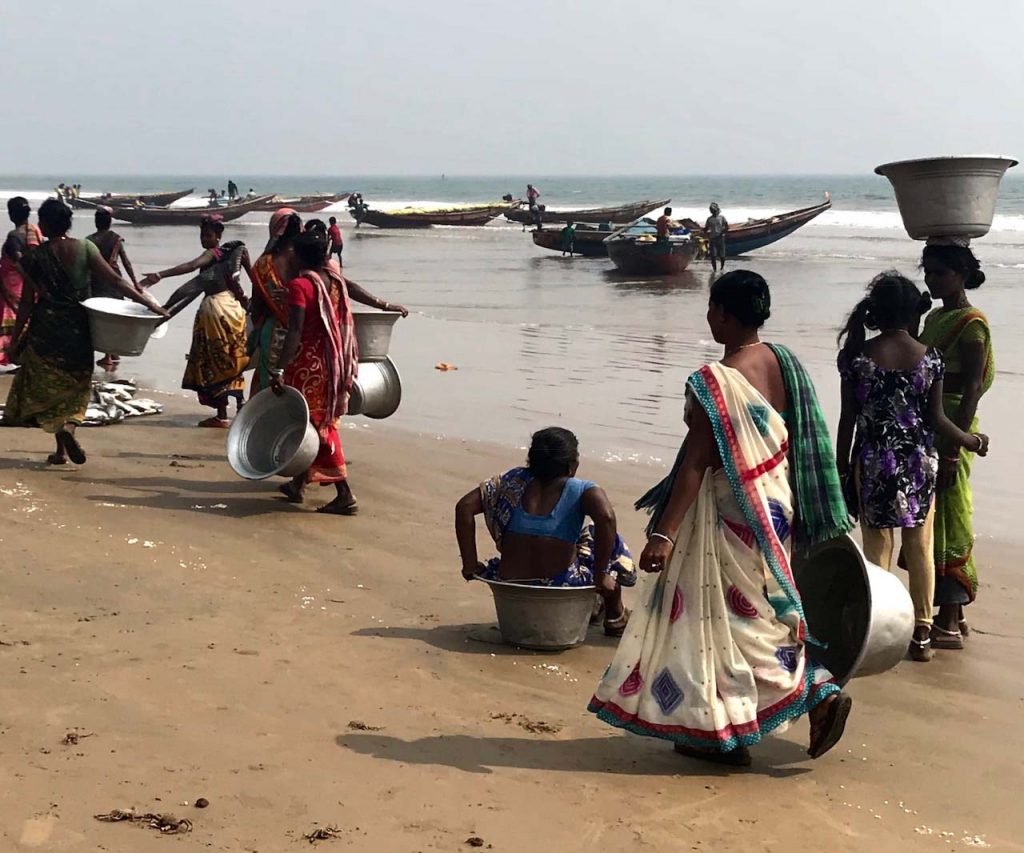 Puri: one of India’s holiest cities

For two nights we lodge at the Mayfair Heritage, part of the same chain as the hotel in Gopalpur. It is even more beautiful, overlooking the sea, with an excellent self-service.

The large number of pilgrims visiting the Jagannath temple attest that I am in one of the holiest sites in India. Jagannath is an incarnation of Vishnu, a strange black deity with large, round, white eyes, made of wood. Non-Hindus are not allowed into the Mandir, but there is always a loophole. Jitu takes us to an old council house (even this is an experience), so that from the terrace at the top we have a good view of the temple built at the end of 1100. The many aspects of India’s profound humanity rotate around this monument: the rickshaws loaded with pilgrims, the cows roaming free in search of the large banana leaves used as eco-friendly plates, the brahmin of the small temple, the carts carrying pots of dal (the local dish made with pulses), the barber, the colourful hotels and tea rooms (a British legacy), the families with children all dressed up, the evening prayer. 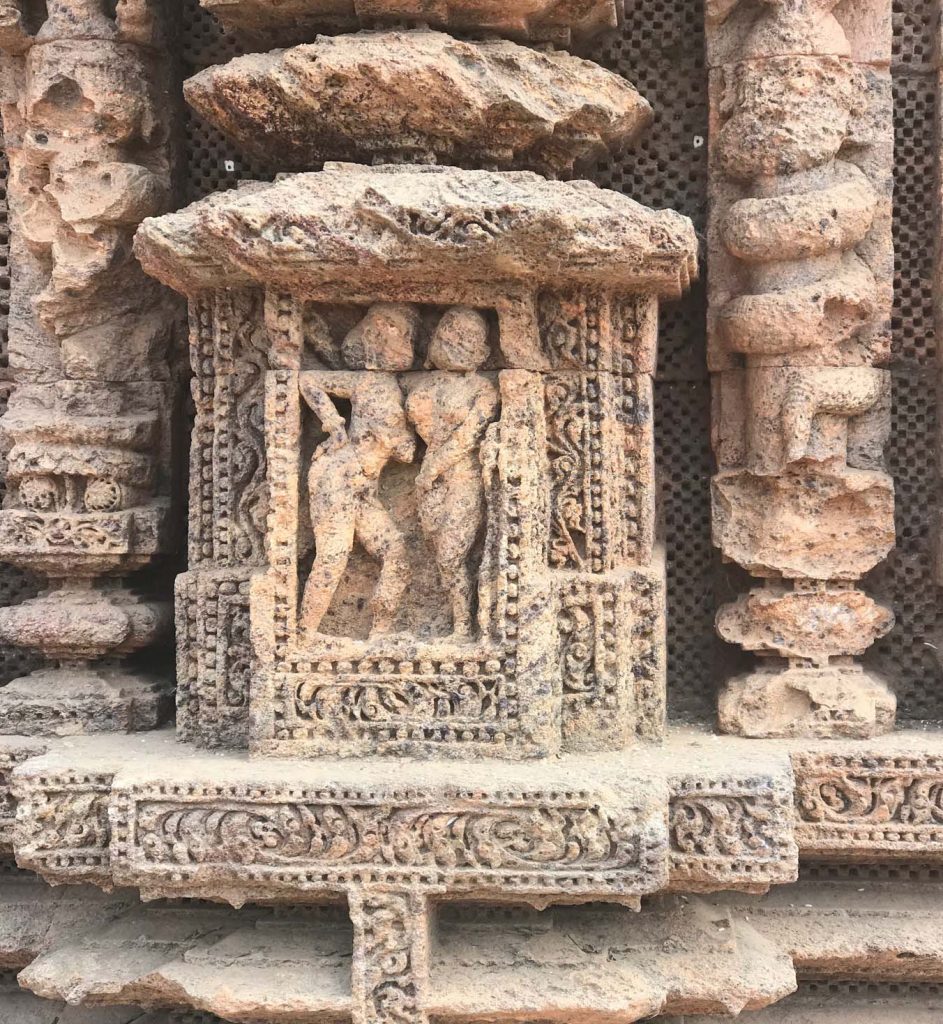 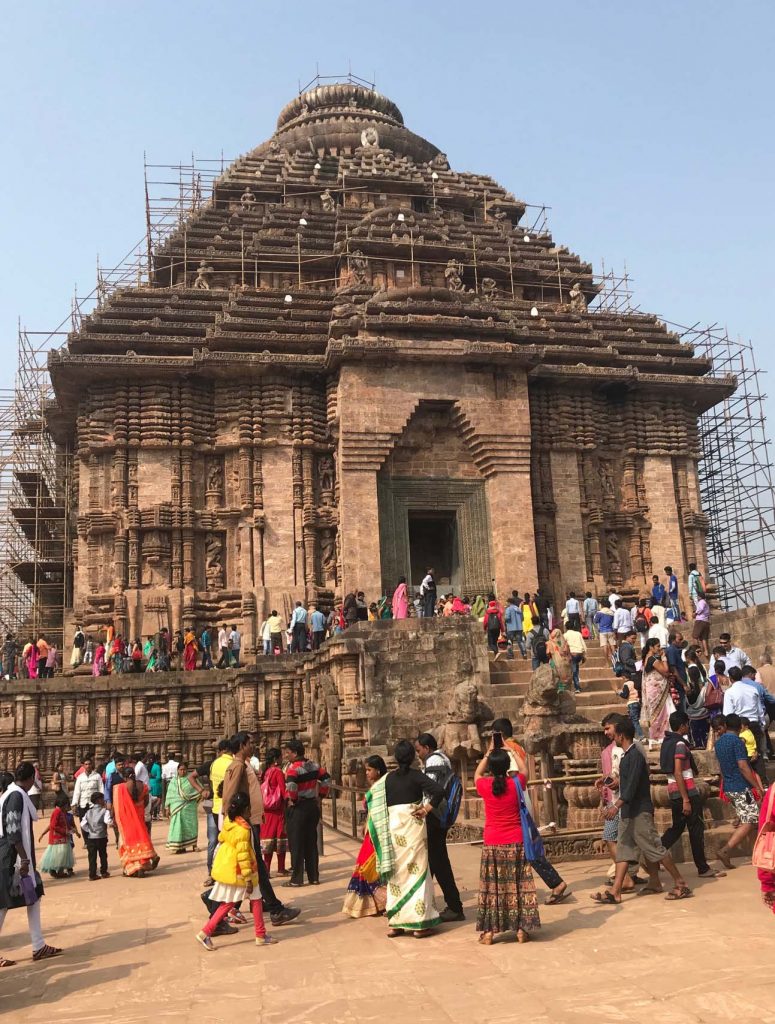 Puri – I am asked to take an exotic photograph

Dry fish market along the road

Sarees are woven in Nuapatna

Puri – Riding in a rickshaw

Nuapatna – the saree is ready

The guru speaks to his disciples

Sadhus in action at the Joranda Festival 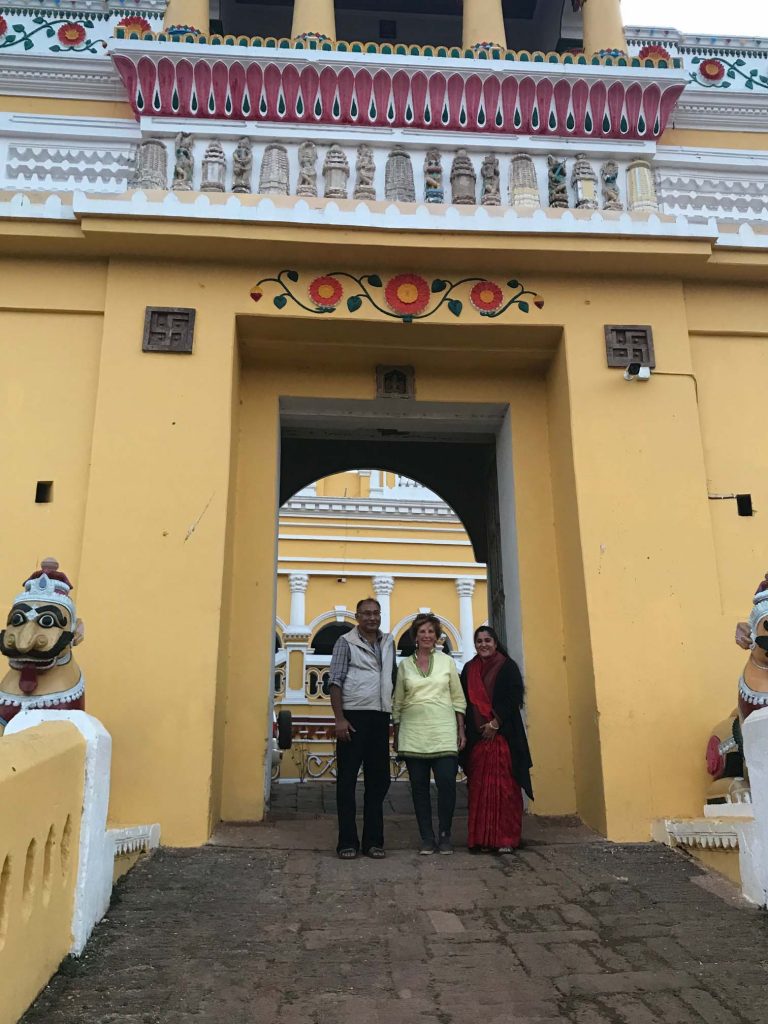 Raghurajpur, with its coloured houses painted with mythological scenes, well-known for its drawings etched into palm leaves, a 500-year-old technique. On the first floor of a small house, guru Maga Nayak teaches a group of students the tricks of the trade. In Nuapatna, a moment of stinginess prevents me from buying one of the magnificent handloom woven Ikat silk sarees, the village speciality, while in Sadei Bareni, the once nomadic inhabitants create metal objects. They have just received an order from a shop in Delhi for 25 thousand items. A good profit. 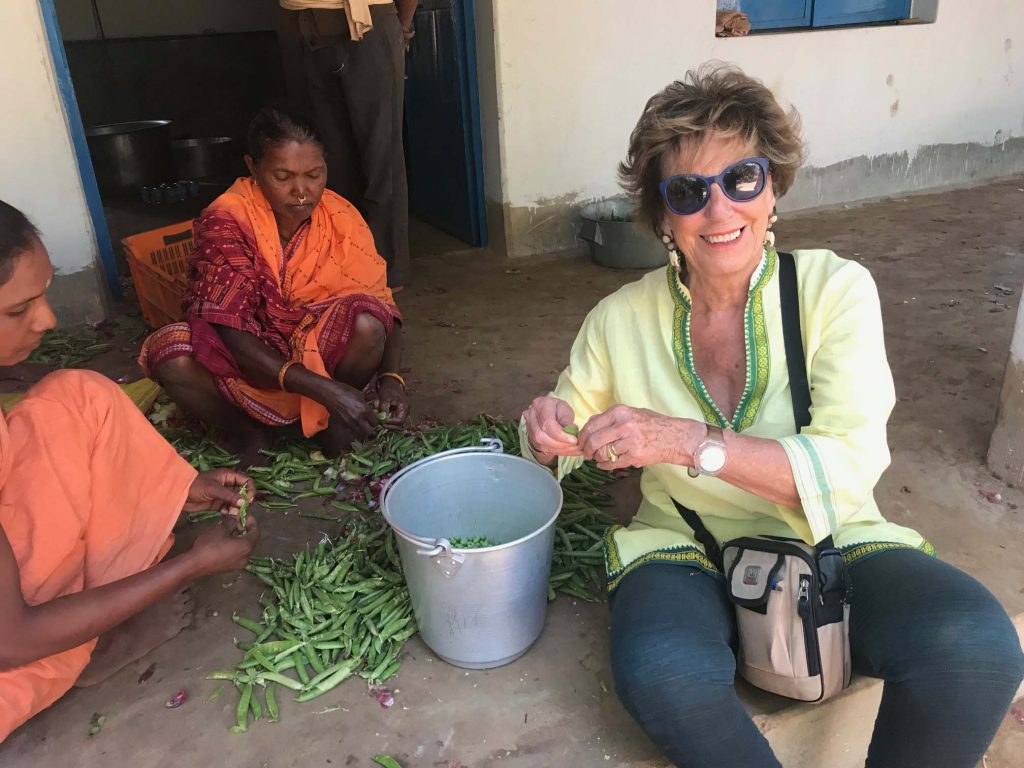 Helping in the kitchen 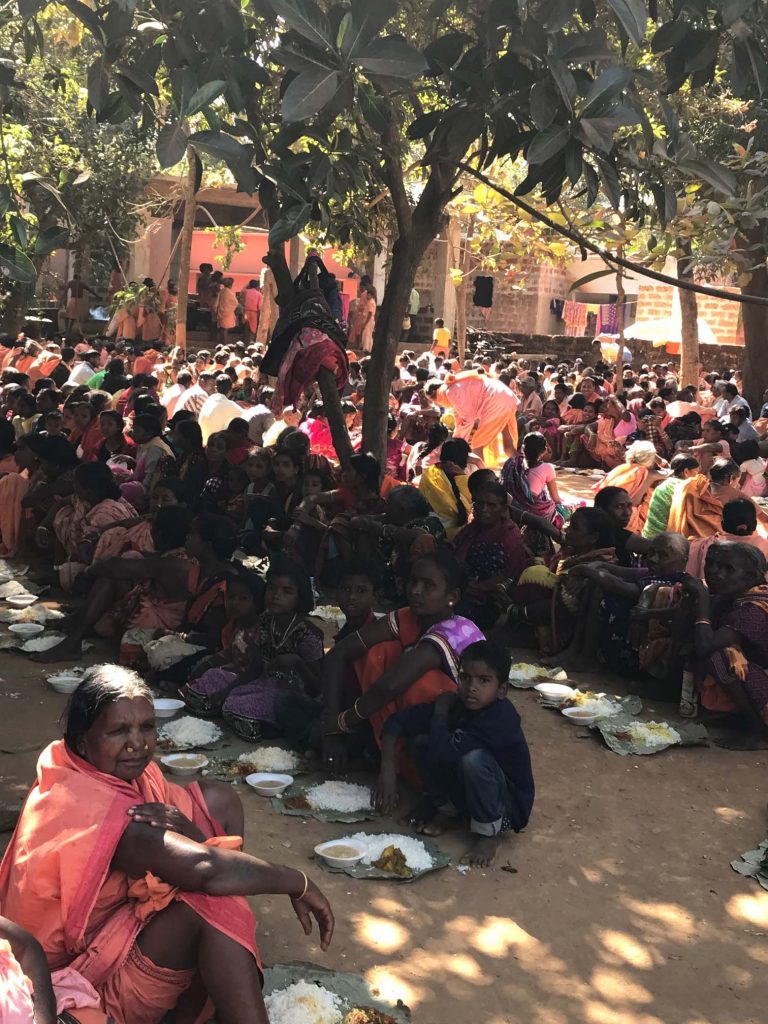 At midday everyone has lunch at the Joranda Festival

A short article on the Corriere della Sera a couple of years ago that fleetingly mentions this dancer arouses my curiosity. Odissi dance, what could that be? I meet Ileana in Bhubaneswar, a developing city with beautiful medieval temples. The dancer invites me to her home, with Indian style decor, the Dance Academy on the ground floor, overlooking a small lake, located in a lively, old part of the city, within walking distance of the most important temples. Her book “My journey: a tale of two births” is an autobiography. A fascinating story. A young girl from a good family in Bergamo, an excellent philosophy student, fond of dancing, reaches India back in 1979, in order to find herself. The meeting with guru Padma Kelucharan Mohapatra was an awakening for the pretty red-haired girl. The teacher introduces her to Odissi dance. Ileana explains, “It is a physical and intellectual dance in which, in order to tell a story using body language, one must know the mythology, philosophy and literature of those times”. Since then dance, with its spiritual message, is at the centre of Ileana’s life and India has become the country of her rebirth. 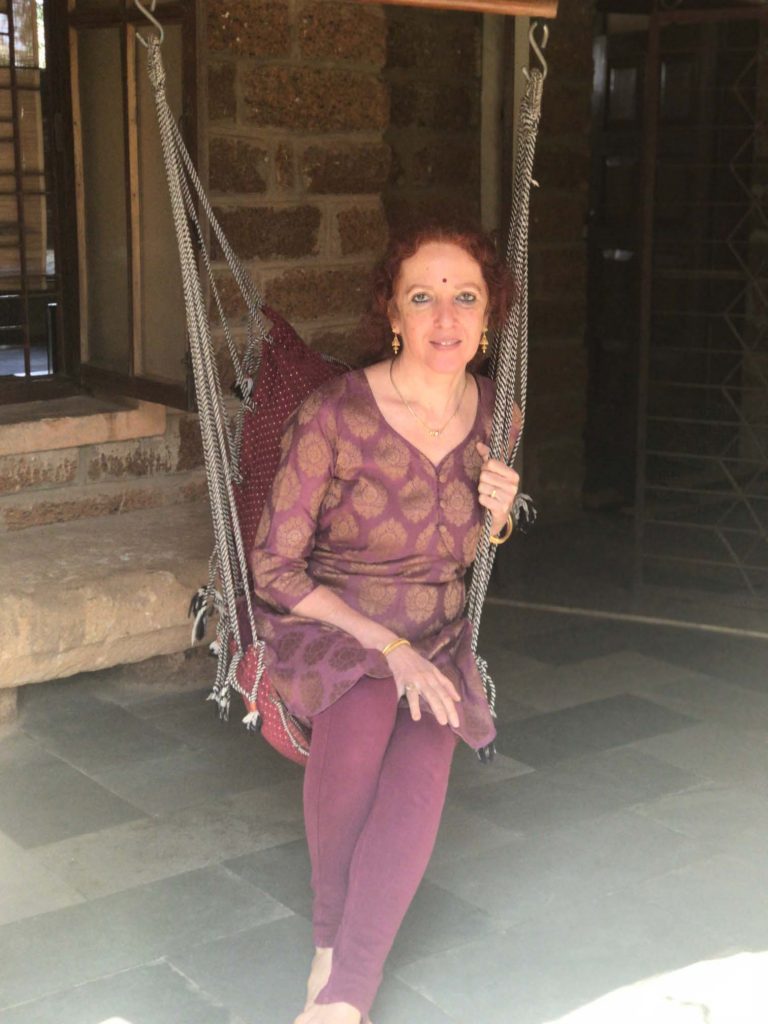 Our conversation carries on in the evening over dinner at the Mayfair Lagoon, the most beautiful hotel in town. 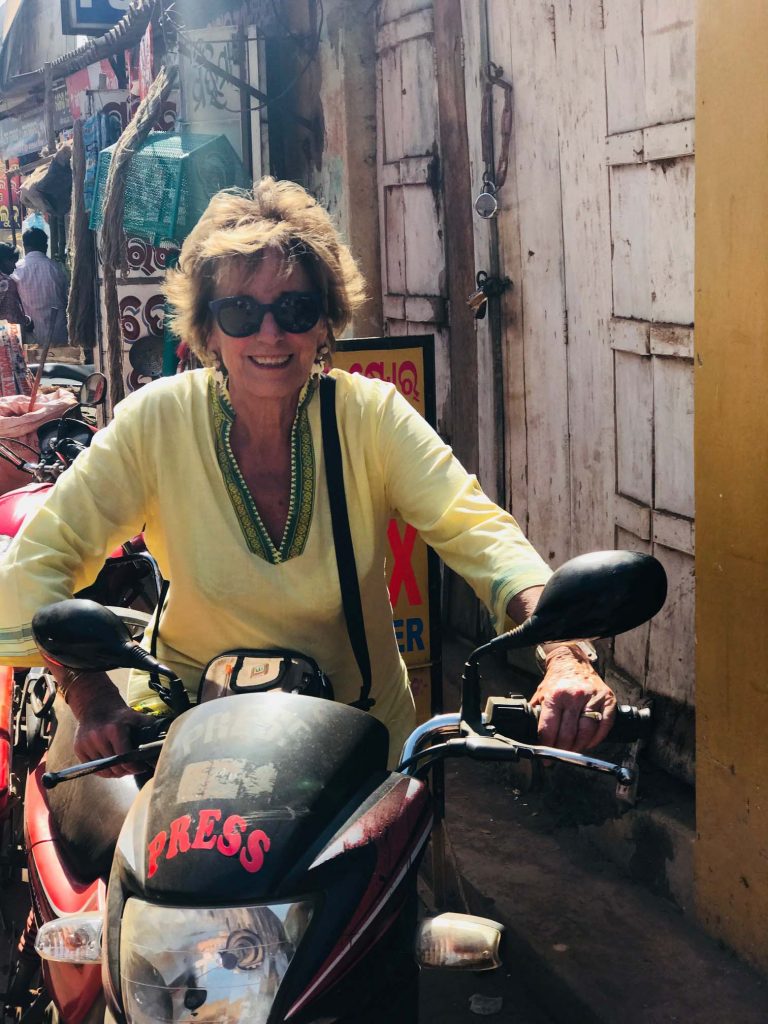 Part of the press at the Joranda Festival 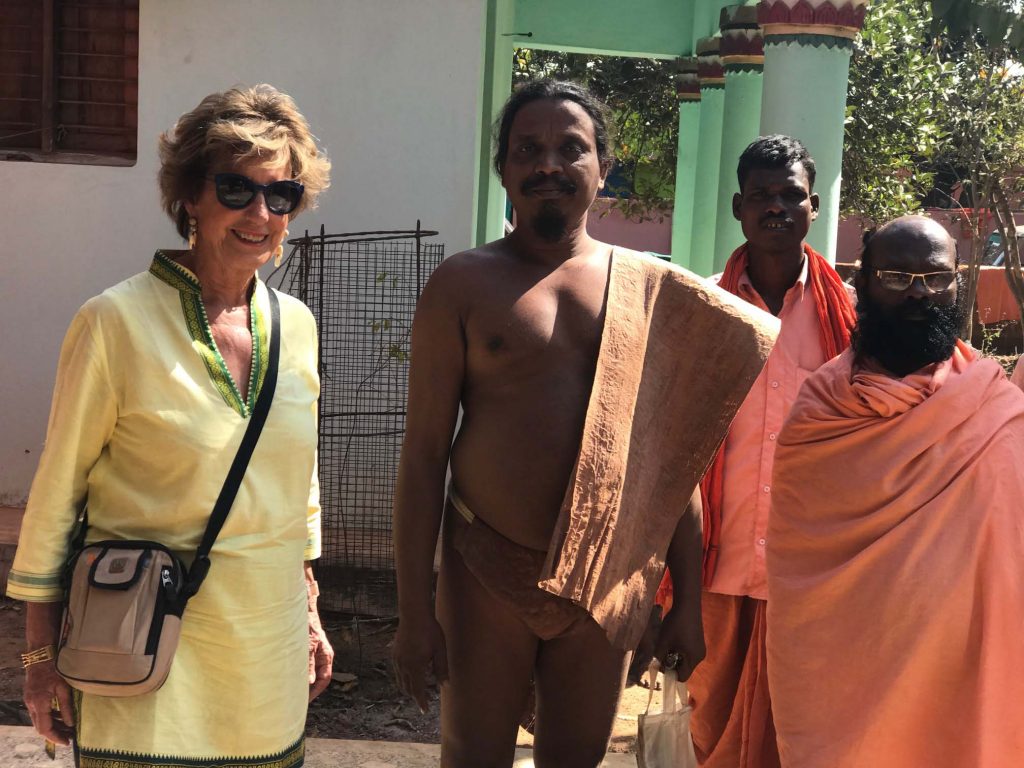 Do Sadhus and the Prince of Dhenkanal have anything in common?

Odisha has another surprise in store for me: the Joranda Festival, also known as Mahima Mela, that takes place on a night of full moon between January and February. The Mahima Sadhus, wearing only tree bark to cover their private parts, are a singular sect who believe God is in the entire universe and who are devoted to bringing peace and harmony into the world. As always, the festival is an occasion for getting together and for joy. It reaches its climax with the fire puja, when litres and litres of ghee are poured onto the fire to ensure peace of life on Earth. The press is present. I am interviewed, the only foreigner, and the next day I am on the front page of the local newspaper.

From the commotion to the peace of Dhenkanal Palace nearby, where Amar Jyoti, a descendant of the royal family, has been living for 7 generations. Part of the palace has been converted into a B&B. Fourteen rooms in all, with antique furniture, perfect bathrooms and a princely reception. “Our children have grown up, they don’t live here anymore”, the princess tells us, “so we decided to keep the house alive in a different way, welcoming guests from all over the world”. We have breakfast in the garden with home-made orange marmalade and yogurt, while for lunch and dinner we are served specialities of the lady of the house. As part of the memorable experience, Amar Jyoti wants to show me that you can still see elephants in Dhenkanal. We lie in wait in a jeep, along the road that skirts the edge of the forest. “At this time the elephants come out of the bush to drink from the river”, he explains. In fact, shortly after, the huge outline of a young elephant takes shape. He drinks, looks around and seems to head towards us. Everyone runs away…but, after a few steps, the elephant does an about-turn. What a thrill! 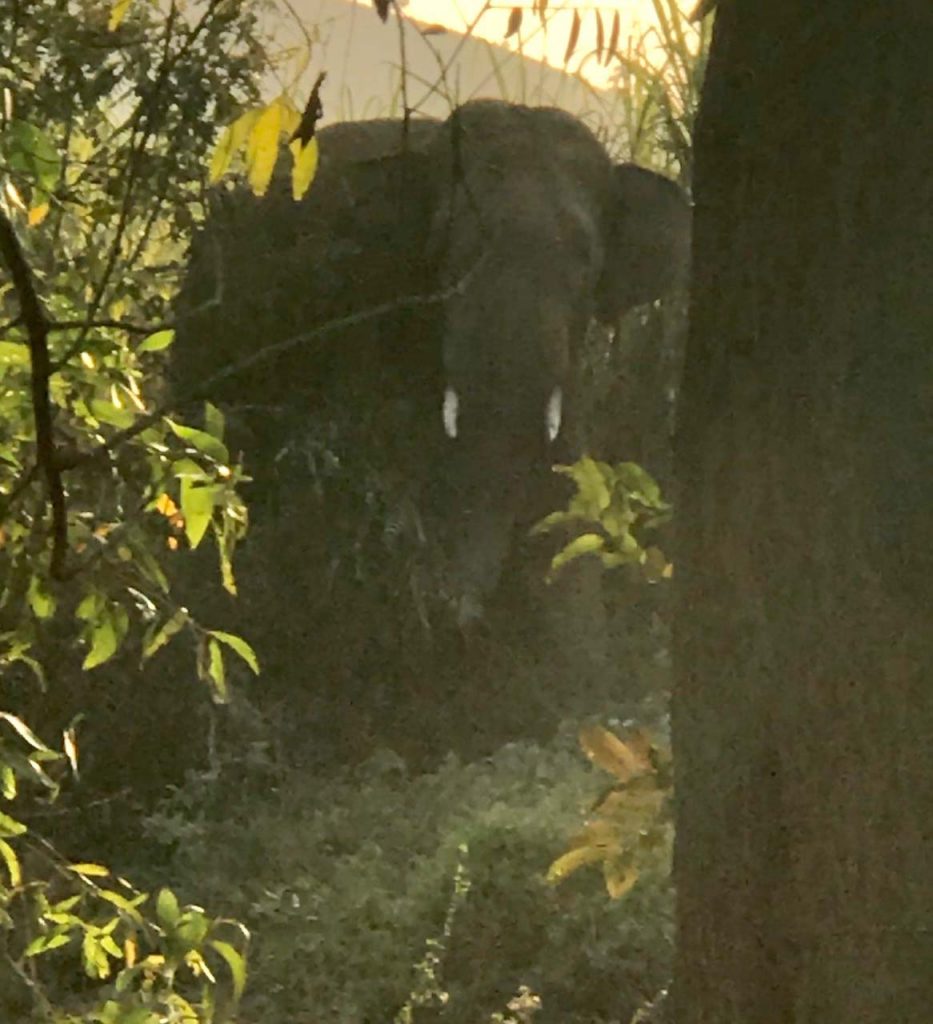 My article on Odisha ends here. What happened after is another story. But a part is missing and it might be fundamental: the practical information! So, till next time.